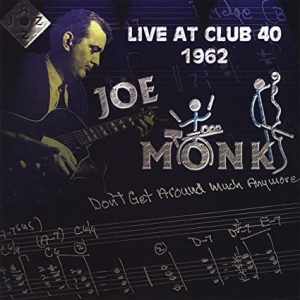 When my guitar teacher, who was a hippie on Long Island in the 1960s, exhausted his limited repertoire, he said, mysteriously: “There is a man called Joe Monk. I have no more to show you. You must now go to him.” As if I outgrew the local dojo in ancient Japan, I then left home to train with a great samurai.

The sojourn led to a tiny, smoke-encrusted studio above a dumpy boulevard in Little Neck, the border of Queens. And there sat Joe Monk, a Long Island institution, hung over, cigarette dangling from his lip, an old Gibson ES-175 on his lap. He dashed off arrangements by rote on a music stand. There were yellowed 8x10 publicity pictures affixed to the wall, photos of forgotten jazz trios and quartets from which a younger, more ambitious version of him posed in the guitar seat. The kind of guy you’d call a “cat.”

Thus began the first of about two dozen lessons with Joe Monk. I treasured each one. There might have been more, but he didn’t always show up.

Monk’s jazz life outside his second-story studio, which often shifted to new locations around the town of Great Neck, was cloaked in mystery. Did Joe Monk carry some profound musical disappointment on his shoulders—or were his greatest aspirations to teach thousands of kids to play guitar? He never released an album, and they said he “turned town” the guitar chair on The Tonight Show orchestra. He played at some joint up on a hill known as a “cheater’s bar.” Presumably where adulterous couples could rendezvous in candle-lit red booths, huddling undiscovered over martinis. Kids couldn’t go there.

But imagine my delight when I came upon a tribute sight (JoeMonk.com), run by Andy Gertler out of Great Neck. Finally, a posthumous CD (Joe Monk Live at Club 40—1962) was released. Like the best live jazz records, we hear Monk through cocktail chatter, glasses clinking, a cash register and bar phone ringing. How could a man with such mastery over traditional jazz guitar have never laid down an officially released album? In the 21st Century, any half-assed guitar teacher has a row of self-released crap for sale. The technology wasn’t there in the 60s, and I doubt Monk would have obliged anyway.

Teaching five-dollar, half-hour lessons was Monk’s forte. He told cornball jokes: “A little higher, Meyer.” He gave lessons to James Brown’s guitarists, who came back to visit and jam in his little studio. I didn’t fully understand what James Brown’s guitarists did or what their job description required, but it sounded awfully cool. Sometimes a few balding, middle-aged men came in with guitars, fellow pros from the 1950’s jazz circuit, circling around Joe and jamming on stuff beyond my 13-year-old comprehension.

“You’ll probably grow up to be some rock ’n’ roll star,” Monk would say, stubbing out his cigarette, with shrug of fait accompli. I never particularly liked jazz, but loved guitar, so I took to the challenge of Joe Monk’s arrangements. I now think of jazz as what the music becomes when it is imitated or taught—the originators of it just play music. Well, Joe Monk Live at Club 40 does sound like jazz, but they are the guitar lessons come to life. Monk never had a properly produced album release in his 74 years, which would have sounded like music.

You hear all those arpeggios and modes, what Joe wrote down as “jazz,” after you learned the basic arrangement. Joe glides over chord changes with seamless dexterity. You can’t tell where one scale ends and the next arpeggio begins, he’s so fluid. Most of his students would have applied the chords they learned to rock, which by the late 60s incorporated anything and everything. Monk dashed off his fabled arrangements effortlessly, with an exhale of Kool cigarette smoke, distilled from his years of playing standards. I’m glad to see on the website they are extremely valued today. The two Schirmer’s music books I saved now seem holy.

When I was 16, about to move to New York City, I mentioned I’d be taking lessons from Jim Hall. Joe was taken aback. No name, short of Wes Montgomery, had more weight amongst jazz guitarists than Jim Hall—who wasn’t known to ever give lessons. Hall was down on his luck for a moment, having to take a gig in The Merv Griffin Show orchestra. (Jim Hall’s stint on Merv Griffin was probably the low point of his career. It didn’t sound like much at the time, when our heroes headlined the Fillmore East. But today, when most guys are out of work, a guitar gig on The Tonight Show seems like a pot of gold, and those cats hold onto their chairs for decades.)

It was a mistake to tell Joe about Jim Hall. During my last few lessons, if I played something wrong, he’d grow indignant: “Don’t you tell Jim Hall I showed it to you that way.” Jim Hall, the gentleman wizard of jazz guitar subtlety (so subtle, it conked you on the head), resembled a Baptist minister. His lessons, given to a lucky handful (Paul Simon took a few), were $20, while Joe’s remained at five. I ended up only taking two. Jim Hall was no Joe Monk.

In my 25 lessons over three years, I never fully conquered the nitty-gritty of jazz improv—the theory of which scales to use over which changes. It still stumps me, and nearly every other professional blues guitarist. I’ve let it go, believing only Joe Monk could have fully passed on this knowledge. I’ve studied hundreds of players on thousands of records, but never fully figured it out. So I’m not a jazz guitarist, I just fake it on jazz. But if only I could have had a dozen more lessons with Joe. . .