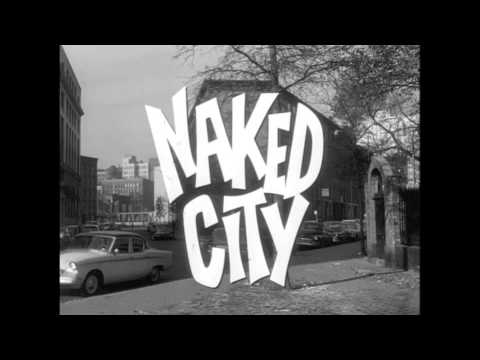 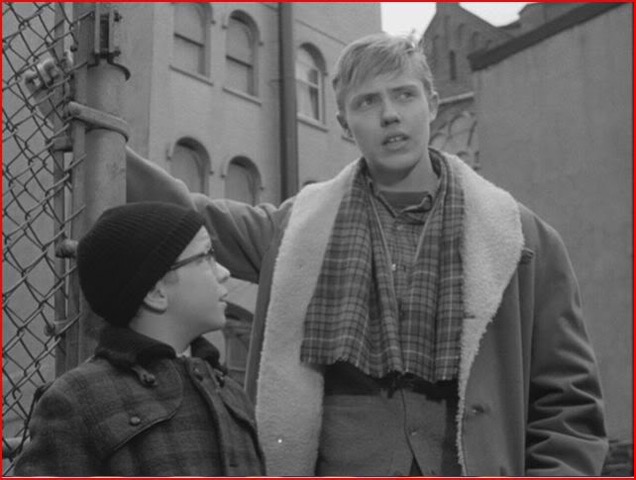 There are eight million stories in the naked city. This has been one of them.

The greatest legacy of Naked City is its location footage. This police procedural, which ran between 1958-1963, is chock-full of New York’s real streets. Breakfast at Tiffany’s/West Side Story-era New York. The year 1962 takes my breath away--because it hovers innocently in the middle of the American century, suspended from the ‘50s, just a hop, skip and gun blast away from the assassination and the Beatles.

Naked City was nearly the only location show shot in New York. We visit the fabled St. Nicholas Arena fights on 66th Street. It would be closed in a year. We take in the vista from the elevated subway at 161st Street looking out on Yankee Stadium and the Polo Grounds. We enter the old, cigar-hazed Madison Square Garden at 50th Street, and cross the Bowery where Lower East Side kids run amok and play stickball. Children play alone on sidewalks and playgrounds.

Naked City shot scenes in greasy kitchens of Chinatown and gambling dens on Mott Street. Jewish garment factories and showrooms on 7th Avenue. Circle in The Square is shown in 1960 as a Village beatnik hangout. The beatniks snap their fingers instead of applauding. We enter hotel lobbies and elevators to behold uniformed elevator men playing their own miserable selves.

Few people of color are present in greater Manhattan, as was then the case outside of Harlem (but Godfrey Cambridge appears!). All the bad guys are white. The police unwaveringly serve the public. The public is mostly unappreciative and gets annoyed easily whenever a policeman asks for reasonable information.

I see the Lost New York that I witnessed as a small boy— mysterious, unfathomable, a Land of Oz where I had yet to understand a street grid. If I lost hold of my mother’s hand, I feared I’d be gone forever.

Everyone is reaching for a smoke, bumping them out of packs. Men wear fedoras, overcoats and ties. You watch these detectives smoking themselves to death in 1960 and imagine them wheezing into old age, if they make it, by the time Reagan is elected. Cars can just park at any curb in Times Square, on Broadway, in Central Park, without meters. Nobody locks their cars or bothers to close windows. Tenants open apartment doors when the buzzer rings without asking who’s there. This is before Kitty Genovese, before JFK, before the slums rose to take their revenge.

Many episodes deal with the strange ways of ethnic communities—Jewish, Italian, Hungarian. Naked City is famous for providing potboiler roles to hundreds of great New York actors, in between stage jobs. These were four-day shoots, with little time for character development. You get actors with last names like Hoffman, Duvall, Redford, Torn, Caan, Sheen, Walken, so young you can barely recognize them. And many of the finest Broadway vets of the age, forgotten today. Luther Adler, and even the acting coach Sanford Meisner. Beautiful young actresses appear in supporting roles, whom I googled, only to find they’ve already died in their 80s.

Episodes were built around the guest actors. This allowed for melodramatic over-acting, playing homicidal maniacs as only grindhouse TV provided.

The leads are good, honest cops. By today’s standards, the smallest disturbance—Little Johnny didn’t come home from school on time—warrants the manpower of two detectives. Det. Adam Flint will climb up to the top of Williamsburg Bridge to rescue a Chinese suicide, always in his suit and tie. A glimmer of 1960’s youth consciousness, still waiting to explode, is implied. Teenagers of 1961, be they delinquents, beatniks or Park Avenue brats, purport to know more than their parents, but turn out to be naïve and full of shit. This, from the WWII-era perspective of the hardboiled writers. And they were right.

Series creator Stirling Silliphant must have had carte blanche access throughout the public corridors of New York. Either that, or producer Herbert B. Leonard bought a thousand film permits. They shot inside subways, in hospitals, the maternity ward of Bellevue, the criminal courts, Penn Station. Letter-painted frosted glass doors, à la Sam Spade, were standard in all office buildings. By the end of the decade, crime made such doors obsolete. Interiors were done at Gold Medal/Biograph Studios in the Bronx (now a Dept. of Sanitation garage).

New York has always been the melting pot of the world, and Naked City’s creator was an out-of-towner. Stirling Silliphant was a Californian until he retired to Bangkok. A forerunner to today’s cop show writer/producers, he simultaneously created Route 66, wrote 47 feature films, and “banged out” 700 hours of prime time drama. A behind-the-scenes industry workhorse, Silliphant wrote for The Mickey Mouse Club, Alfred Hitchcock Presents, did the screenplays of The Towering Inferno, The Poseidon Adventure, Shaft in Africa and won an Oscar for In the Heat of the Night. This was before Dick Wolf’s Law & Order-era formula hacks, driven to nervous breakdowns whilst toiling over one $50,000 script. Though Ed Wood could have written a few of the episodes, Silliphant rightly claimed that some of his Naked City scripts--he wrote 32 the first season--were far superior to Heat of the Night.

Ostensibly the facade of Midtown North on 54th Street, the fictional 65th precinct of Naked City is a neighborhood police station. Suspects behave civilly in the holding pen. They don’t spit, piss in the stall or fling shit—which would be easy, considering they’re behind feeble chicken wire only inches from police desks. Witnesses never give straight answers. They always vent their spleen or tell superfluous backstories, allowing for closeups of the dicks doing eye-rolling takes. Dragnet addressed this issue by their famous directive, Just the facts, m’am.

Naked City reflects the dawn of what everyone considered a modern era, Eisenhower giving way to Kennedy, before America knew what it was in for. But to me, it’s old New York. Psychiatrists are mentioned without ridicule, nervous breakdowns are viewed with sympathy; psychology is now a factor in crime. Not to casehardened Lt. Parker, who runs the precinct, but to idealistic Det. Adam Flint. All-American actor Paul Burke, with an unmistakable freckled Irish face, seamlessly portrayed Flint. A good Catholic schoolboy with a progressive bent—he surely voted Kennedy. Hailing from New Orleans, it was no stretch for Burke to voice a dignified New Yorkese. Bourbon Street and Brooklyn shared an almost identical patois.

In later years, wholesome Paul Burke and New Orleans D.A. Harry Connick Sr. were indicted together on racketeering charges in a gambling sting.

This was method, Freudian policing. Nevertheless, Flint turns utterly carefree after shooting dead bad guys, and walks off with an arm around his girlfriend five minutes later. No Administrative Leave, no investigations or questions asked. This was before swat teams, which evolved after the Texas tower shooting. Detectives in overcoats use only their handguns to take on gangs with tommy guns, or shoot it out on rooftops with psychopaths. All good psychos end their chase on a rooftop, falling to the pavement.

Det. Flint’s overwrought sense of moral justice is kept in line by Lt. Parker (Horace McMahon), my favorite character. He is similar to several old boxing coaches I’ve had. Parker, who looks 75 by today’s standards, also runs up to rooftops firing away. The NYPD must have loved this series, which aired during the same seasons as the buffoons on Car 54 Where Are You?

Finally, the title Naked City was the name of a weekly Screw newspaper column I did for five years. In this case, covering who was literally getting naked in the city. The box set of 138 episodes came out in 2013, when I scooped it up.

So, here are my notes from some episodes.

Ranked 93rd by TV Guide on its 100 Greatest Episodes list. It’s not. Annoying performances by Robert Morse and Dustin Hoffman, learning their trade–acting.

“Killer with a Kiss”

“The Man Who Bit A Diamond in Half”

“A Hole in the City”

“Tombstone For a Derelict”

Robert Redford as a neo-Nazi psycho.

“An Economy of Death”

“A Kettle of Precious Fish”

“The Face of the Enemy”

A favorite episode. Jack Warden as WWII hero, who mowed down a hundred Germans, now a drunkard. Great scene where some bottom-feeding public relations hack tries to get him to wear his medals while selling aluminum siding, door to door. Sets Warden off to a mass murder spree, thinking he’s back on Normandy.

“The Night the Saints Lost Their Halos”

“A Case Study of Two Savages”

Tuesday Weld and Rip Torn. I’ll devour anything with Tip Top Tues. Deranged hillbilly who kills people as easily as chewing gum; Tuesday his “15 or 16-year-old” Arkansas wife—her mother isn’t sure which age.

“A Run for the Money”

Eli Wallach as a degenerate gambler, vs. Keenen Wynne as a stone-faced killer-for-hire. Just when you expect Wynn to bump off Wallach for blowing $16-grand in a dice game at the docks, Wynne shrugs it off. The interplay between fellow degenerate gamblers is entrancing. Great actors, working fast in a pulp medium, to lasting effect.

“The One Marked Hot Gives Cold”

Robert Duvall as ex-con who did a seven-year stretch for manslaughter (for killing someone who bullied him in the Navy). Has beautiful secret friendship with 12-year-old girl. They meet at Central Park Merry Go-Round every day and go to the zoo. A jealous landlady accuses him of child molestation.

“Daughter, Am I in My Father’s House?”

Possibly my favorite. Barbara Harris is the greatest stage actress I ever saw on Broadway. Her charisma didn’t always translate to film.

Four West Side Story-style delinquents terrorize a prim schoolgirl in a movie theater. They try to pull her into a car, but run when she screams. She drops her books and flees. Her father (Dan Duryea) is a WWII vet, still living in the war, wearing combat boots. He calls cops useless civilians. He’ll take care of it himself.

The schoolgirl works in a religious statuary store. The father dresses her up as a slut, to walk before teenage boys on doorsteps, while he trolls behind with a crow bar. On the first night, we follow tensely while she passes four punks; closeups of the father’s grip tightening around crowbar. But none of them do anything. So the next night he doubles down, making her dress twice as slutty, buying cheap jewelry and falsies at Woolworth’s. This time a JD with a cigarette dangling off his lip blocks her path and father jumps from the car to pummel him.

“Dust Devil on a Quiet Street”

Perhaps the series’ worst episode? Robert Walker Jr. as an actor who yells and threatens everybody in class. Like with Harvey Weinstein, nobody does anything, they take it like masochists.

“Spectre of the Rose Street Gang”

“Don’t Knock it Till You’ve Tried It”

Insane episode with Walter Matthau as Upper East Side psychiatrist kidnapped by two aging Vegas showgirls. Matthau is the rare actor who could pull off being a romantic lead, considering those looks. See the difference between pulp TV acting, where everything shot in a couple of days—compared to movies, where months might go into the character preparation.

She barges in on Matthau with patient: "Boxie, I told you, what happened in Las Vegas was just for that weekend. . .”

“Her Life in Moving Pictures”

Eileen Heckart as a homely maid for a wealthy Riverside Drive residence, victimized by a sociopathic gigolo, Bradford Dillman, who makes off with the master’s jewels. Good script. 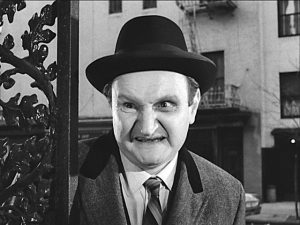 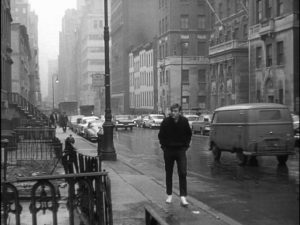 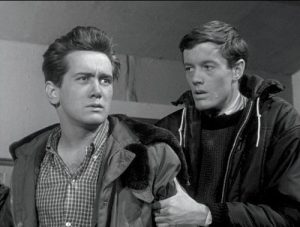 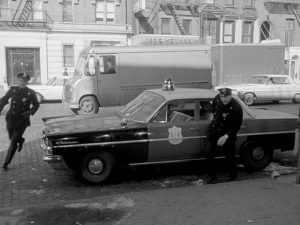 No Black people were ever shot by police in Naked City 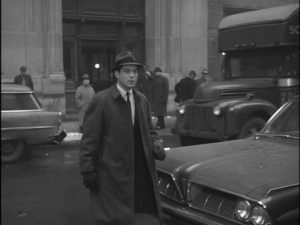 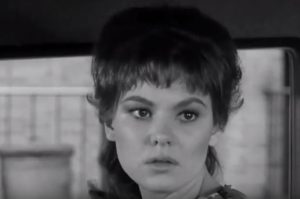