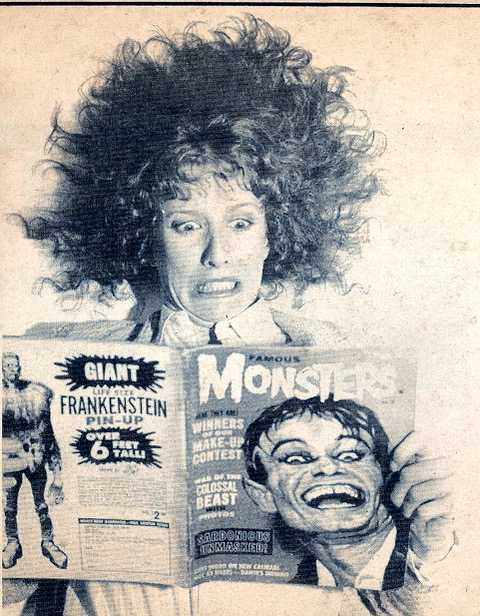 Laraine poses with my July '62 issue of Famous Monsters #18 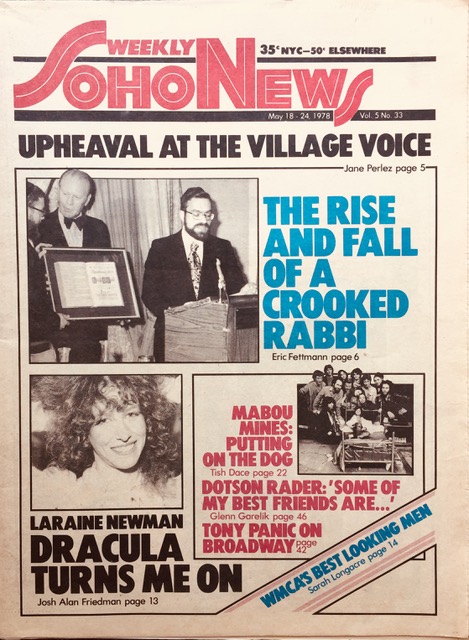 The Soho News, 40 years ago

Forty years later, I detect an embarrassing undertone of boyhood crush in this Soho News fluff interview I did with Laraine Newman. I brought a handful of Famous Monsters mags for her to pose with. They ran the cover line “Dracula Turns Me On.”

Laraine Newman led the way through a dimly lit maze of corridors and stairwells. Without a guide, I felt I might wander for days, even vanish, in the hidden passageways of NBC. But Laraine was present—at home here after three seasons on Saturday Night Live—so I was safe.

The dressing room, which she shares with fellow Not Ready for Prime Timers Jane Curtain and Gilda Radner, resembles a room in a Holiday Inn or a dentist’s office—neat as a pin and without pictures or decorations. A bowl of fruit, a cheese platter and an icebucket full of Tab lay on the coffee table. The volume on a large TV monitor was turned low, as Steve Martin romped around in rehearsal.

Sniffling from a cold, Laraine nestled into the couch. After we’d snapped open some Tab and broken the ice a bit, I revealed the main objective of my visit: to find out if she harbored any deep feelings for the big three—Frankenstein, Dracula and the Wolfman—and to get her talking about horror movies. I struck gold. True to my suspicions, Laraine Newman, now 26, was an avid reader of Famous Monsters of Filmland magazine in its heyday and pored over Creepy and Eerie (until they became repetitious and the artwork lost its edge). Chiller Theatre was a weekly ritual and Jeepers Creepers, a Los Angles-based horror program, occupied her mornings.

“I loved Frankenstein and Dracula, really identified with them. I sympathized with Quasimodo, especially the Charles Laughton and Anthony Quinn versions. As a kid, you relate to their love for Esmeralda. Esmeralda was Maureen O’Hara and Gina Lollobrigida. I couln’t respond to the woman in the silent versions, so Lon Chaney’s Quasimodo didn’t affect me.”

Most folks find vampires a bit unnerving. Rising from their sleep of death, they glide through the night, puncturing jugular veins. But Laraine doesn’t consider Count Dracula a scary guy.

“The original Dracula was never frightening, it was sexual. The Dracula legend itself was erotic. They brought it to its truest form in Hammer films, showing women with cleavage and teeth. Also in a film called Uncle Was A Vampire, with Christopher Lee: A little bellboy at this grand hotel ends up inheriting the whole place, and he becomes a playboy. But he’s been bitten by his uncle, who was a vampire. In the daytime, these women would be swimming over to him on the beach, going ‘Bite me, bite me!’” Laraine’s impression of a desperate woman begging for a vampire bite demonstrated beyond a doubt the sexiness of vampirism.

The loudspeaker broke the spell. “Garrett Morris. You are wanted for the nerd science fair.”

After the announcement, Laraine recounted some of her favorite horror film plots. “When we were about four, my twin brother and I went to see a movie which nobody’s ever heard of, called X-76 Bloodrust. There was this substance that looked like vomit, and if it touched you, you died. It was really simplistic, but it scared the shit out of me for years.

“I saw Horror Castle in a theater when it first came out. This character called ‘the punisher’ straps a rat cage around a girl’s face, and the rats eat her nose. It really knocked me out.”

Laraine was spreading cheese across a cracker. It looked like the very substance she described in X-76 Bloodrust.

I asked about her earliest horror-related recollections.

“Jeepers Creepers was the L.A. counterpart of Zacherle’s show. This was live TV in the late ’50s, so I barely remember it. He was always mixing potions, and doing little blackouts. There was one sketch with a woman in her bedroom eating nuts. She goes to sleep and a vampire flies in and bites her neck. You hear this crunching sound, the vampire looks up. His teeth are broken. There must have been nuts in her esophagus.”

Of all the Frankensteins, Laraine considers Boris Karloff the most attractive, especially in the later films when Karloff was thinner. Henry Hull she rates the handsomest of the werewolves. But Christopher Lee is her main man, and she was thrilled when he hosted Saturday Night Live.

“Man, I’d really been wanting that to happen for years. I’d always say, ‘How about. . . Christopher Lee?’ And when it finally happened, he didn’t want to play Dracula. He had been typecast in the role for so long that it left a bad taste in his mouth.”

Chris Lee and Laraine Newman did a sweet bit toward the end of the show. Lee, as Mr. Death, comes to apologize to a little girl for the death of her dog. Shirley Temple meets Mr. Death. I hope some smart producer will team them up again.

As for real blood on Saturday Night Live, the cast glosses it over. “There was a time when John Belushi accidentally hit Buck Henry in the head with his samurai sword. It bled pretty bad, and Buck had to come back out with a bandage on his forehead. For the rest of that show, each time someone came out, they’d be wearing a bandage on their forehead. By the end of the show, we all had bandages.”

As a Los Angeles teenager, Laraine Newman’s first professional acting was in summer theater. Never wanting to be a college girl, she went from high school to Europe, where she auditioned for the Royal Academy and the Old Vic at a time when they weren’t too keen on accepting foreigners, especially foreign women.

“They would audition about 300 people and take 80 preliminaries out of that. I always made the 80 group and then was rejected. I was real depressed and thought I had no future.”

Somewhat distraught, she left England for Paris. She asked Marcel Marceau if she could study with him, and spent a year and a half in mime school. “Mime is based on a whimsical kind of comedy which I hate. In limited doses it’s okay, but as a regular diet—McDonald’s. Ronald McDonald.”

Back in the States, Laraine became an original member of the Groundlings, an L.A. improv groulp similar to National Lampoon. After appearing in a Lily Tomlin TV special co-produced by Lorne Michaels, she became a Not Ready for Prime Time Player in the show that became the veritable heart of Saturday night for thousands.

Laraine Newman has an exquisite screen presence, as evidenced in American Hot Wax, her debut. In the role of Teenage Louise, based loosely on Carole King, she stumbles upon a black quartet wailing in the street. She teaches them one of her own numbers; they perform it for Alan Freed, who bills them in his rock and roll extravaganza. After the show, Teenage L is moved to tears over the audience’s response to her music. It’s one of the finest cries I’ve ever seen—the girl transforms herself into a wilting bouquet of flowers. If Laraine unleashes this acting ability on horror films, the medium should flourish.

“I would want to be the malevolent source if I did a horror film. Actually, I wouldn’t mind playing a heroine, unless it was something like The Demon Seed. But I always related to the monster, never the heroine. The heroine was the one who would always trip when the tyrannosaurus was chasing everybody. You’re so involved in the vividness of the peril everyone’s in, that when someone is impeding the escape, you wanna see them get it.”

Should a rich part in a class horror flick turn up, Laraine would be ready to sink her teeth into it. In fact, she already has a custom-made set of vampire teeth that she flashes when people least expect it. She usually carries them everywhere, but today, unfortunately, she left them at home. Lord knows, I would have loved her to bite me.