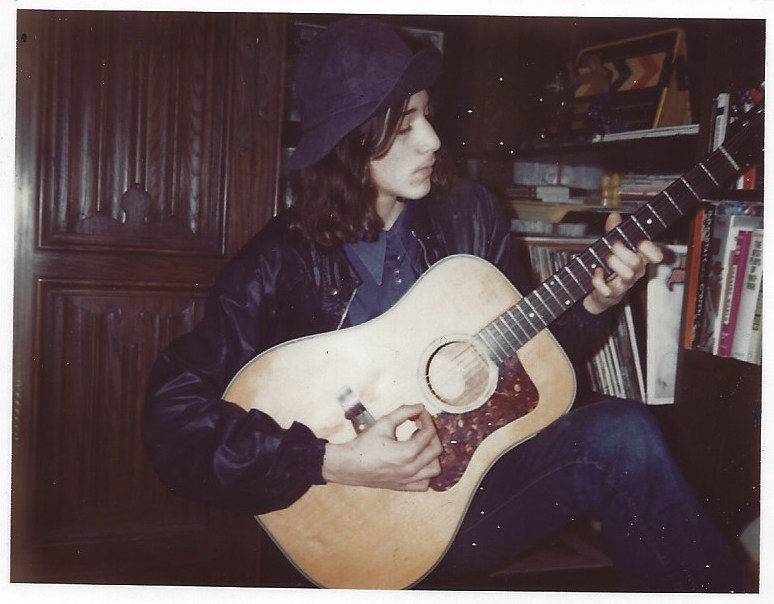 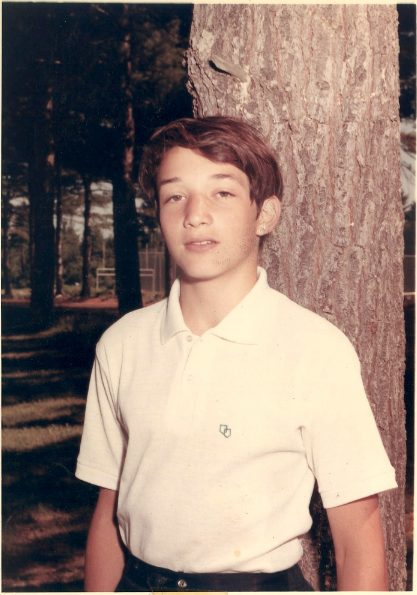 There was one precious teenage year when I was pursued by girls, girls, girls. When I was 14, from 8th-9th grade. After that, an arm injury led to depression and the jig was up. But oh, what a year. I saved some letters, reprinted here.
I also remember a “mole,” a spy named Karen who would gather up secret notes that girls passed to one another under desks. Confiscated notes about me. Fifty years before today’s texting, this was the mode of girl-to-girl communication in junior high. I don’t recall who all the girls were. Some are no doubt grandmothers by now.
--Josh Alan Friedman 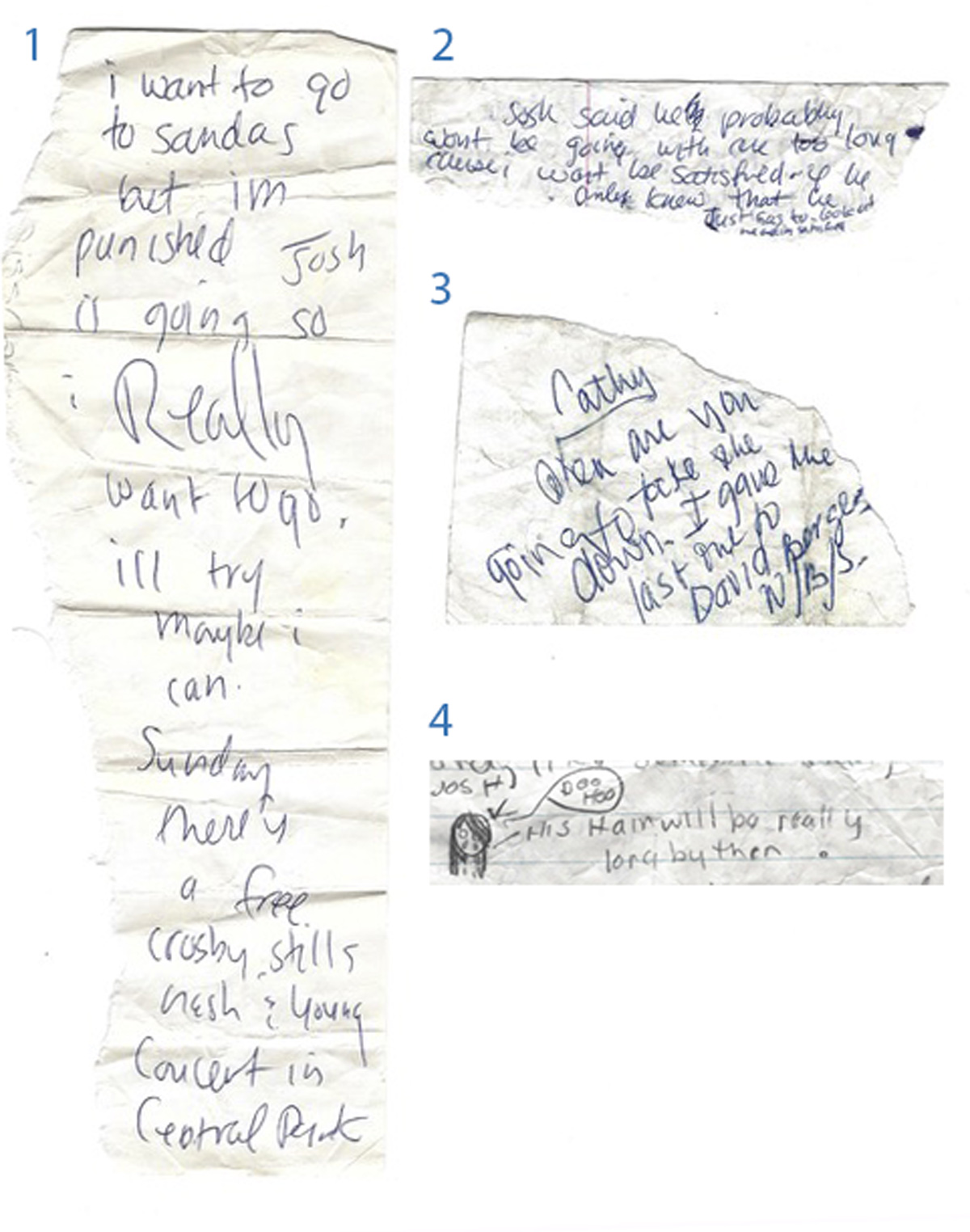 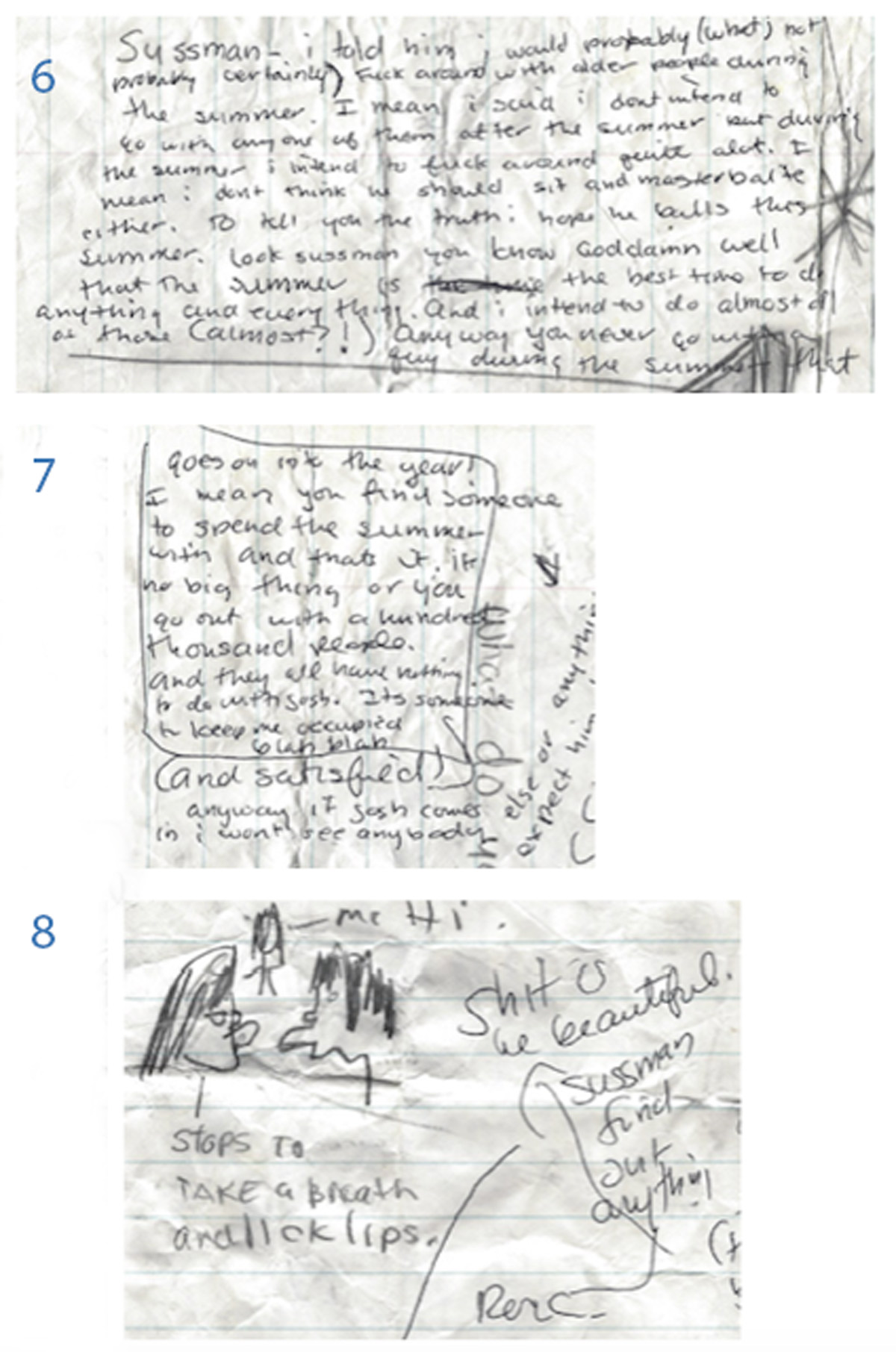 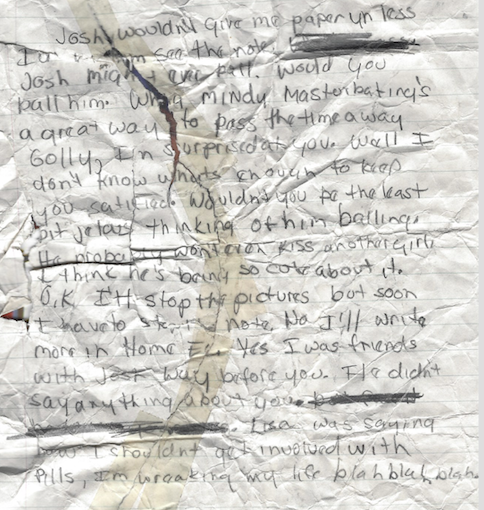 1. i want to go to Sandras but im punished. Josh is going so I Really want to go. i’ll try maybe I can. Sunday there is a free Crosby, Stills Nash & Young concert in Central Park

2. Josh said he probably won’t be going with me too long cause i wont be satisfied. If he only knew that he just has to look at me and im satisfied.

3. Cathy When are you going to take the down. I gave the last one to David Berger.

4. His hair will be really long by then.

5. Josh wouldn’t give me paper unless I’d let him see this note. Josh might ever ball. Would you ball him. Why Mindy masturbating’s a great way to pass the time away. Golly, I’m surprised at you. Well I don’t know what’s enough to keep you satisfied. Wouldn’t you be the least bit jealous thinking of him balling. He probably won’t even kiss another girl. I think he’s being so cute about it. O.K. I’ll stop the pictures but soon I have to stop the note. No I’ll write more in Home Ec. Yes I was friends with Josh way before you. He didn’t say anything about you. Lisa was saying how I shouldn’t get involved with pills, I’m wreaking my life blah blah blah.

7. goes on into the year! I mean you find someone to spend the summer with and that’s it. Its no big thing or you go out with a hundred thousand people. And they all have nothing to do with Josh. Its someone to keep me occupied blah blah (and satisfied). Anyway if Josh comes in i wont see anybody or anything.

8. me Hi. Shit is he beautiful. Stops to Take a breath and lick lips. Sussman find out anything. 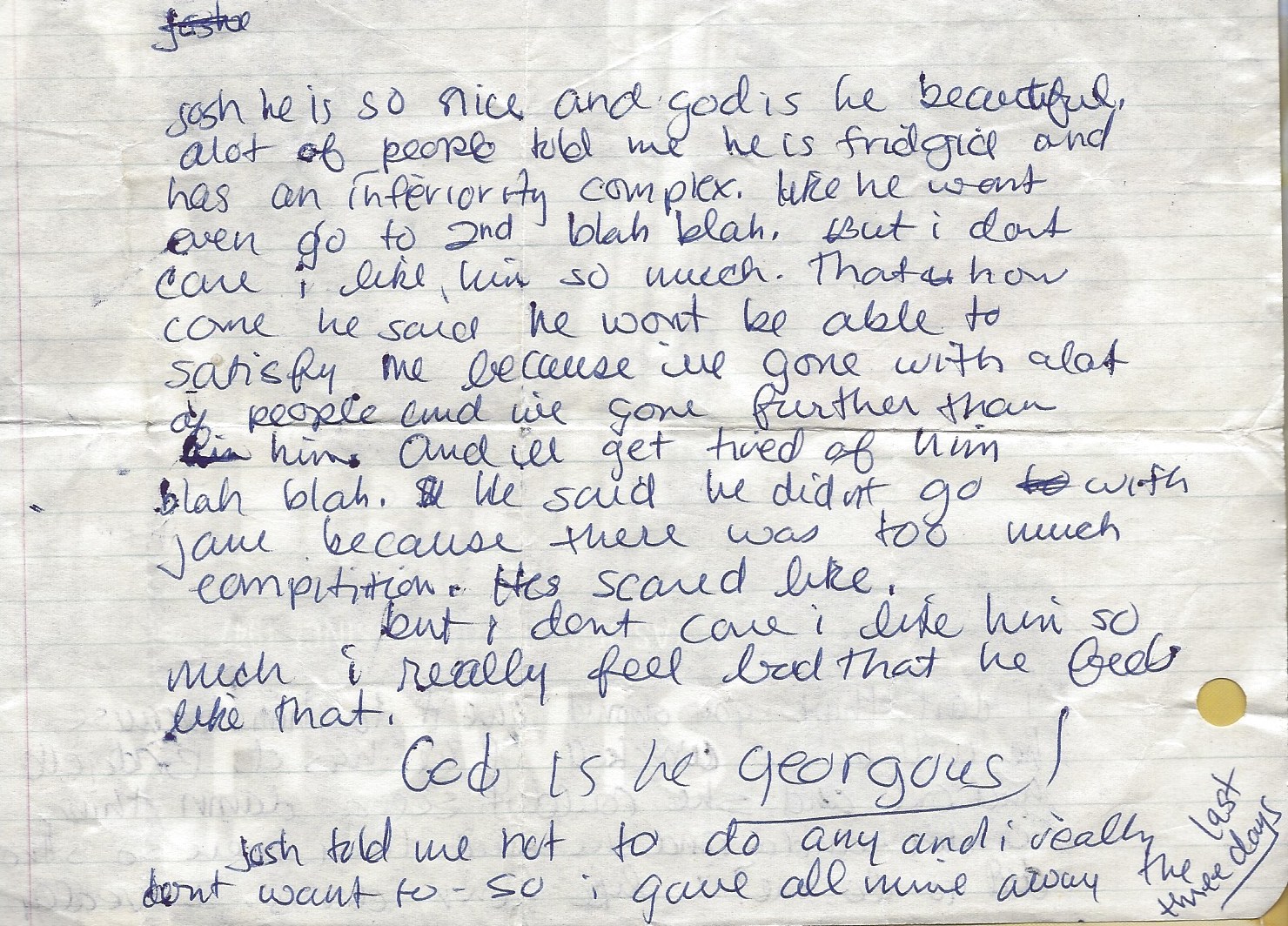 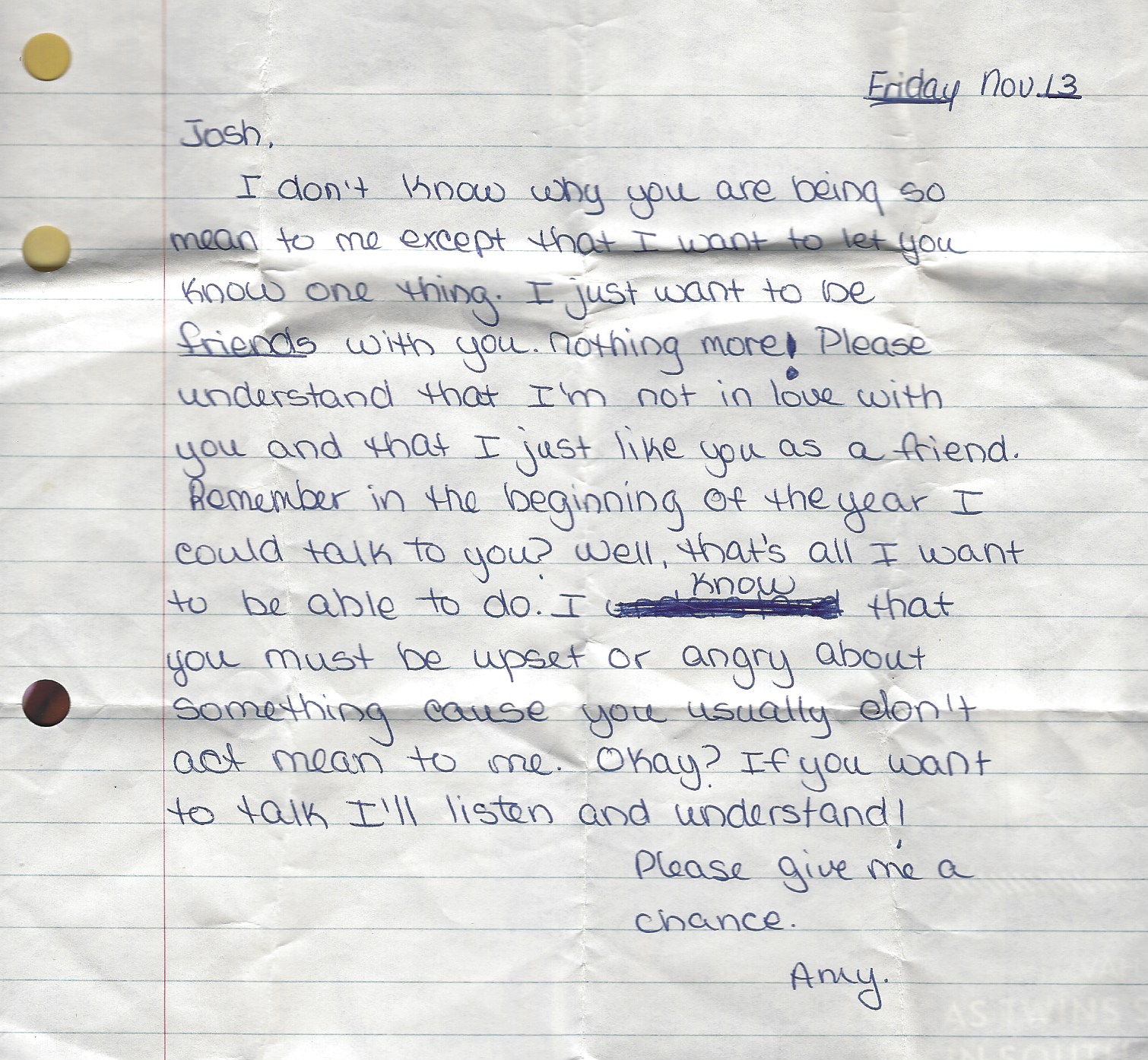 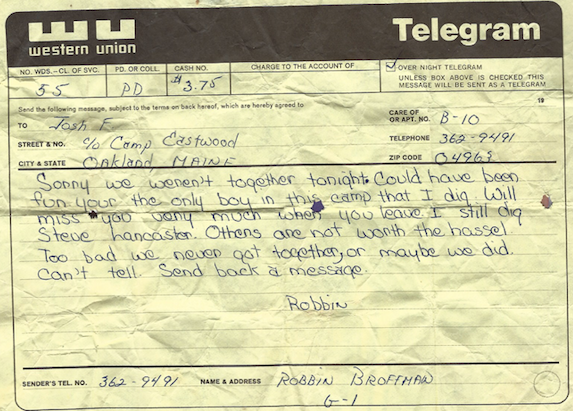 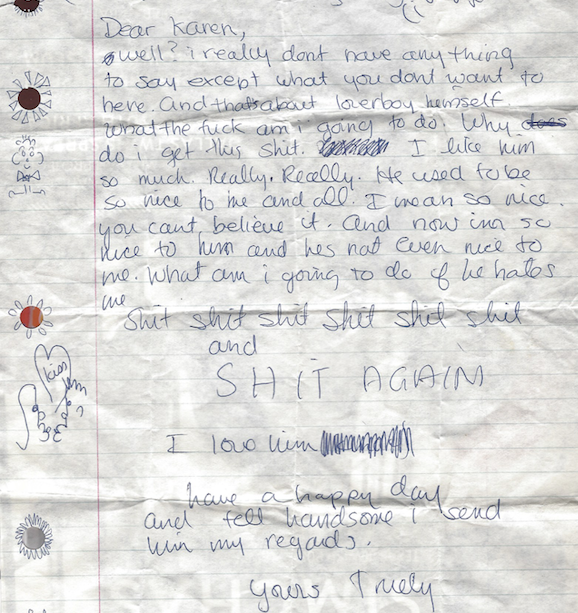 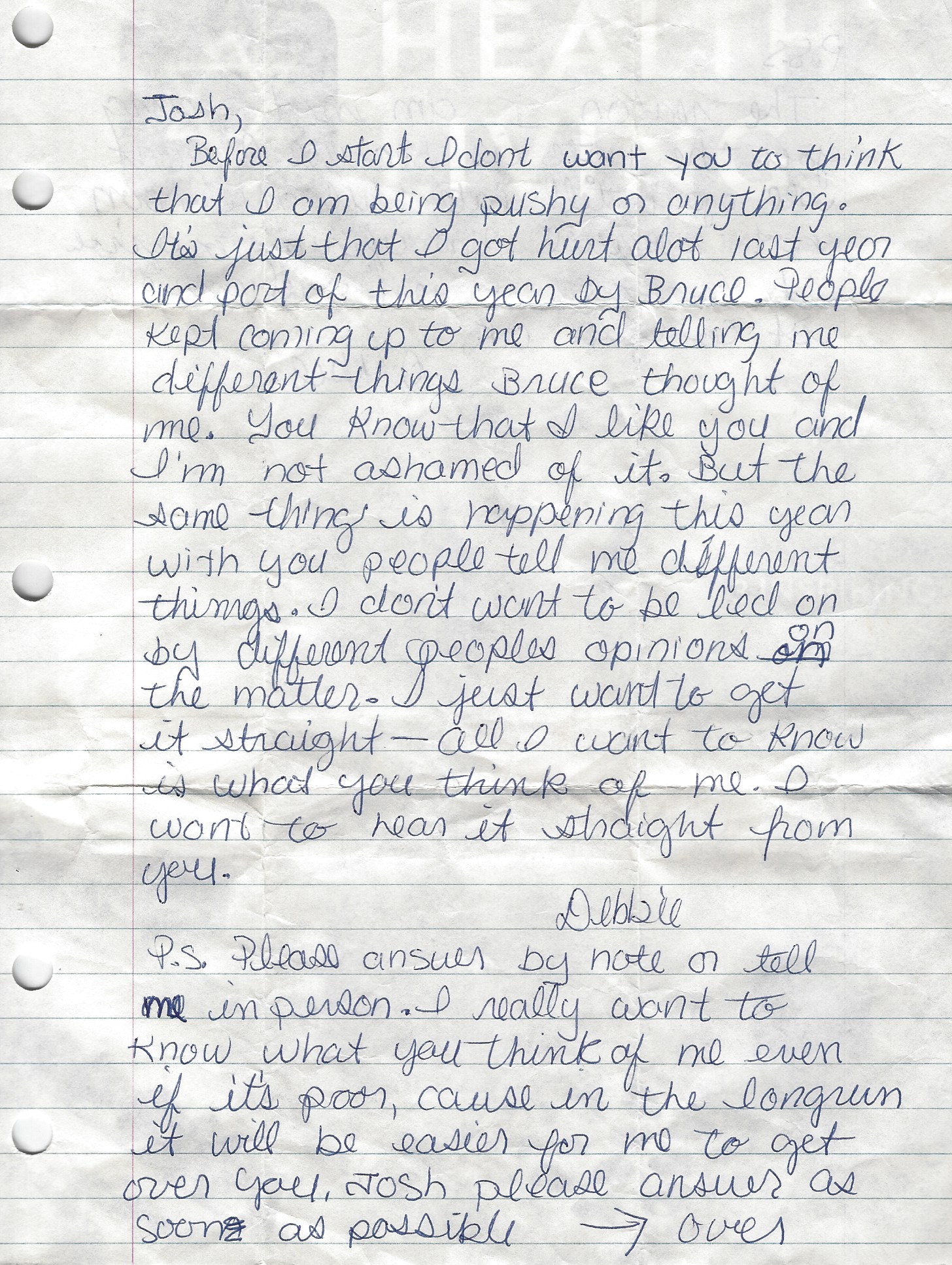 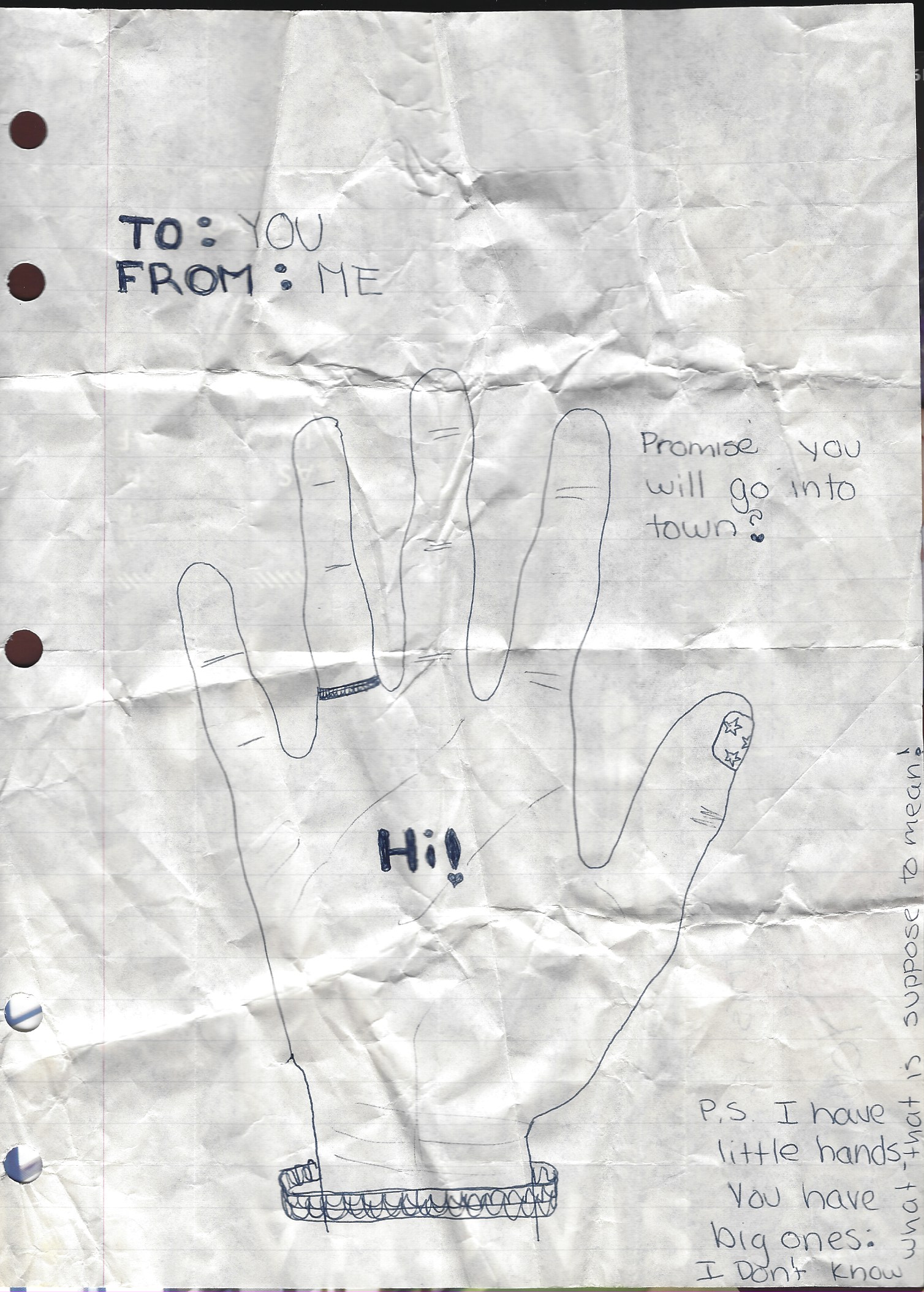 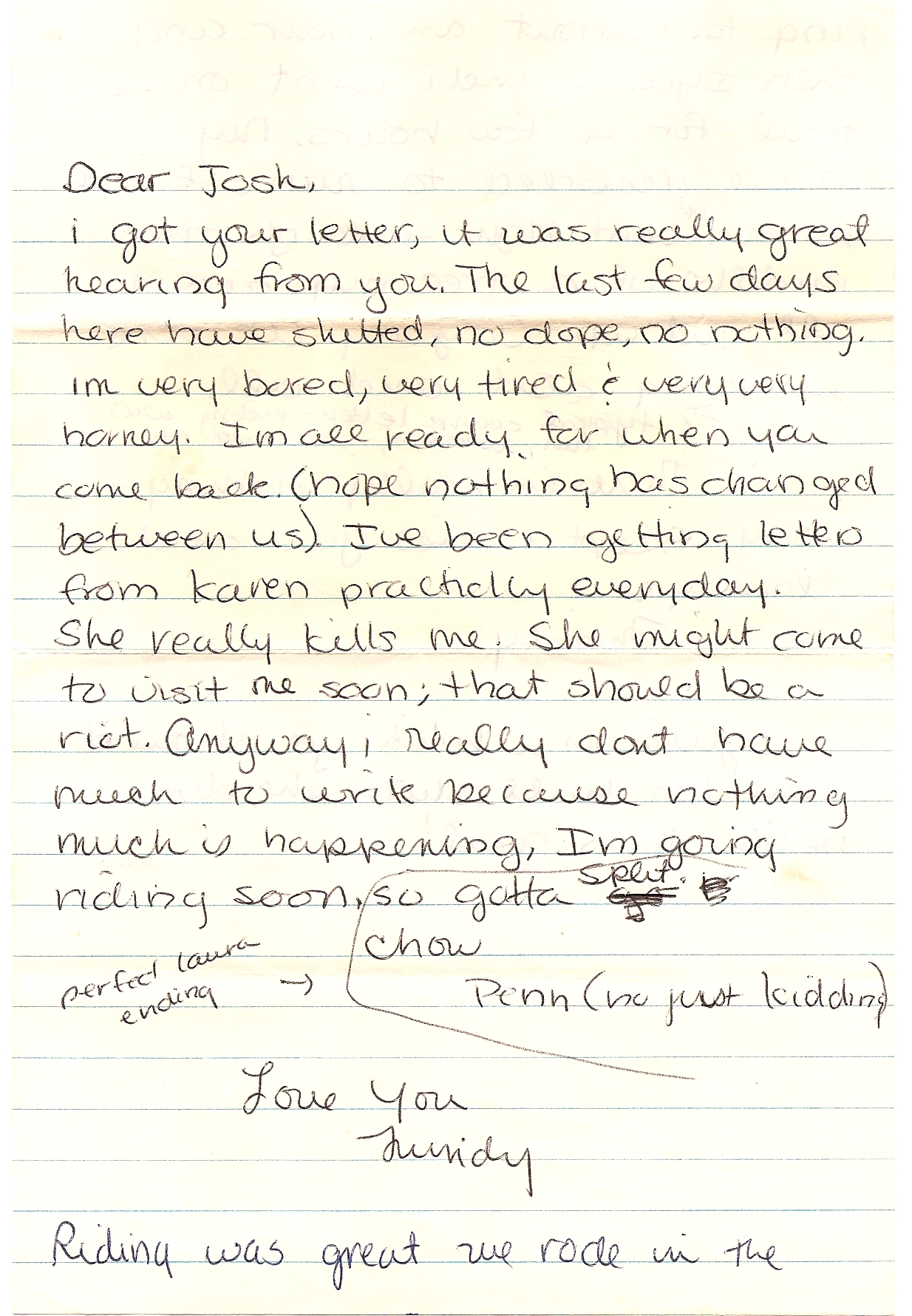 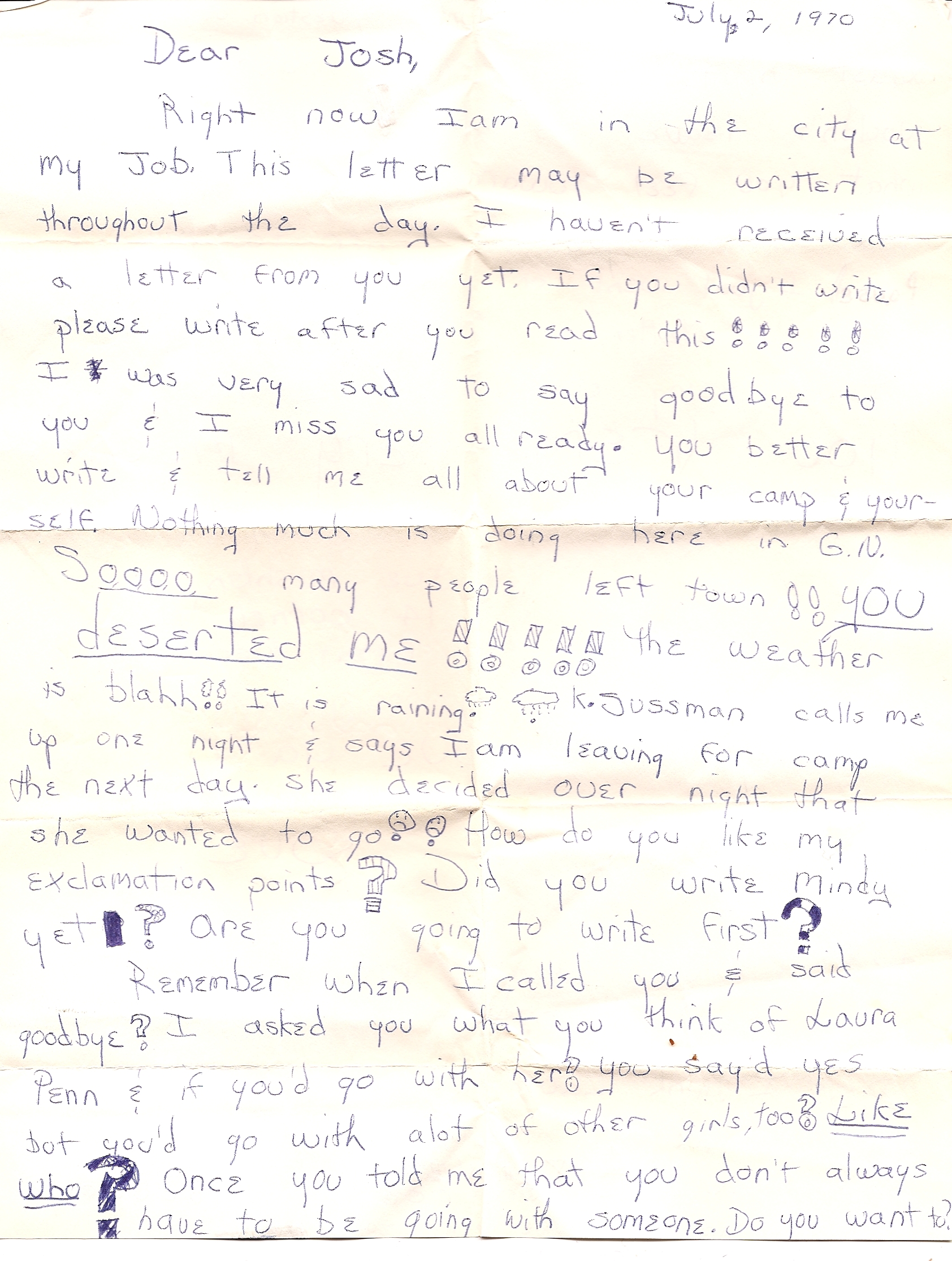 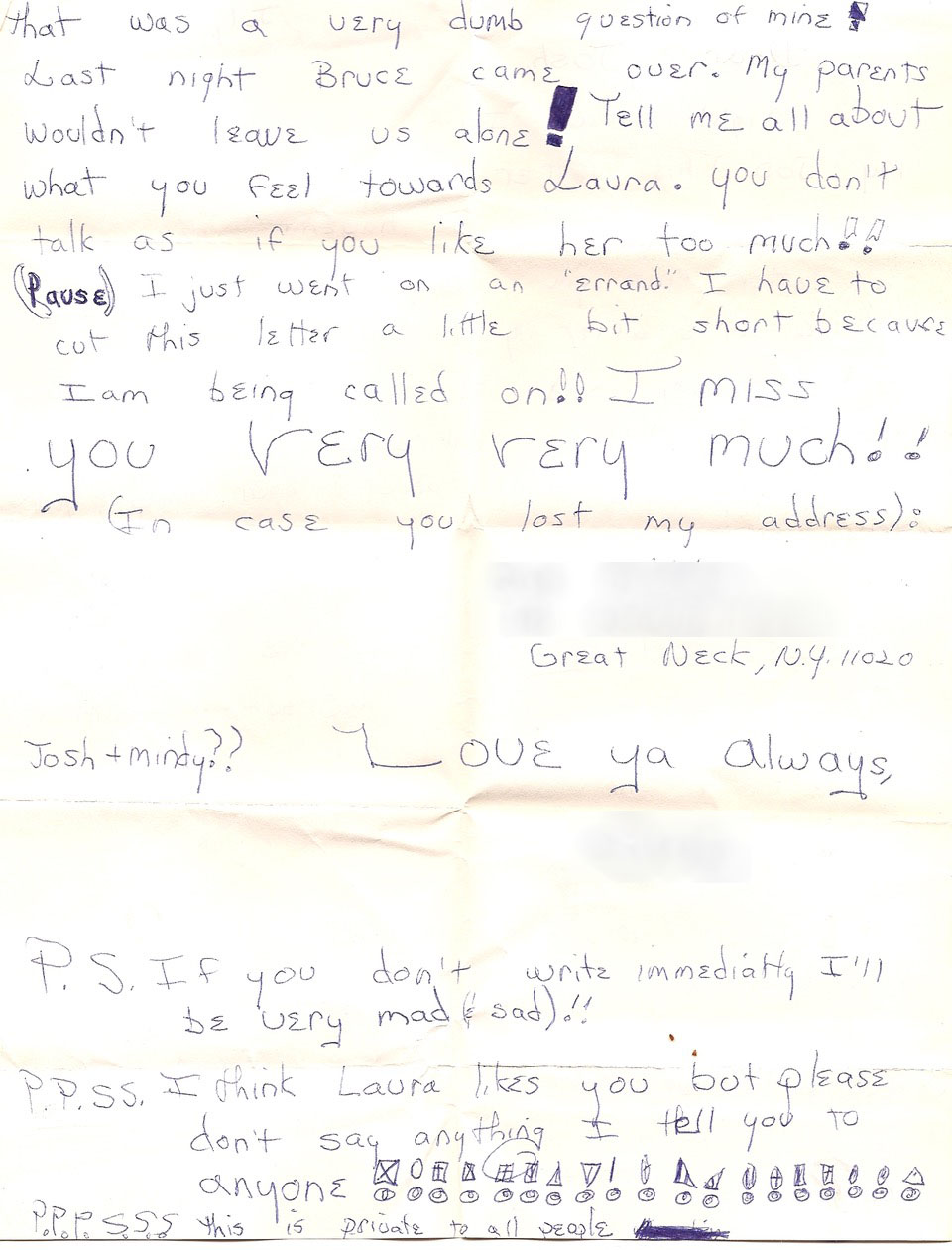