I’m sometimes asked what my favorite New York books are. These became favorites after I wrote Tales of Times Square. I never read much about New York before that. I was too busy experiencing it. 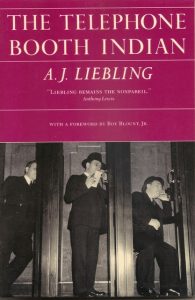 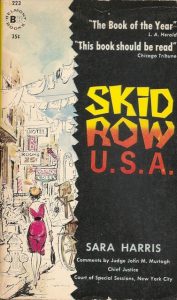 After completing my own ten-year study of the neighborhood’s secrets, I was amazed to find Liebling’s chronicle from fifty years earlier. It had been out of print since 1942. The title refers to Bud Abbott-types who occupy telephone booths along Broadway as their office. The origins of the hat-check biz, the Brill Building, backstage at Olsen & Johnson’s Hellzapoppin, the Count de Pennies. A trip through the Great Whore of Babylon—Times Square.

Like the Frenchman’s, Alexis de Tocqueville’s Democracy in America, this ultimate masterpiece on New York was written by a transplant from North Carolina. Devoid of fancy writing, this collection brings the previously out-of-print books of Mitchell’s New Yorker career—McSorely’s Wonderful Saloon, Old Mr. Flood, The Bottom of the Harbor, Joe Gould’s Secret--into one volume. Sublime.

The great American novel about Coney Island. I always wondered if such a book could be written—and this one came through in spades. The re-imagination of how the midget city came about, told by Trick the Dwarf, is so brilliant, if it’s not all true, it should be.

From the back cover: “It tells how decent people become alcoholics, prostitutes, criminals.” And from Judge John M. Murtagh’s afterward: “Most of us are hardly aware that such persons exist. . .” Unforgettable voices from the Bowery of the 1950s are captured here forever.

New York in the Thirties, as photographed by Berenice Abbott (Dover, 1973)

I often sit hypnotized by these photos, perhaps the most profound ever taken of the city. If only I could be set loose in this time and place, for just 24 hours. I’d probably head straight for Hubert’s Flea Circus on 42nd St., catch a matinee at Minsky’s Burlesk, get a rush-hour shoeshine at Penn Station, dinner at Lindy’s. . . (None of these appear in the book, however.)

The Power Broker: Robert Moses and the Fall of New York, by Robert A. Caro (Random House, 1974)

There are very few biographies in which you walk away feeling like you actually know the person. Robert Moses reshaped the infrastructure of civilization—for better, then worse—like no other man before or since. (Talk about leaving your carbon foot print.) This 1300-page monster of a book is a whole course in subterranean politics, civics and geography.

A screenplay that reads like a novel, this portrayal might be even better than The Sweet Smell of Success—which originally outted Winch as the monster he became. W.W. was the Oprah of his day. And it all happened in New York, not Chicago.

This Place on Third Avenue: The New York Stories of John McNulty (Counterpoint, 2001) A Daily News rewrite man who moved on to the The New Yorker. He drank a bit, and these charming 1930’s stories take place in working class bars along the Third Avenue elevated subway.

Coney Island: A Postcard Journey to the City of Fire, Richard Snow (Brightwaters Press, 1984) Even more than Olde Times Square, Penn Station and Ebbets Field, it’s hard to believe the original Coney Island really existed. The place where hot dogs, roller coasters and amusement parks were invented. The eighth wonder of the world prophesied the 20th century to come. The postcard photos are their own acid trip.

Dining in New York with Rector, by George Rector (Prentice-Hall, 1939)

Son of the founder of Rector’s, the famous Broadway restaurant that closed when prohibition hit town. An historical travelog of 1930’s New York, George Rector eats his way across the city in this hardcover restaurant guide. Erudite, literate and hungry, he reviews some 200 restaurants, of which only several survive today (Sardi’s and a number of hotels). “Will the sight of personalities of the day in their informal moments add pleasure to your dining?” he asks, revealing the eat-abouts of O. Henry. To him, it was “the art of eating” and “the art of drinking.” 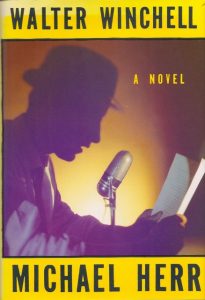 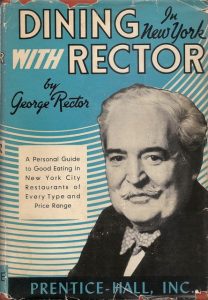 And special mention for these two: 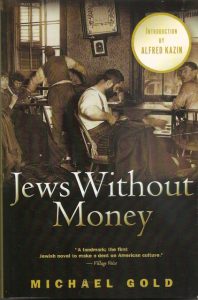