The Greatest Crime Paper in America

The New York Times front-page motto has been printed in granite for over a century: All the News That’s Fit To Print. The Evening Whirl—East St. Louis’s “Uninterrupted Crime Fighting Publication Since 1938”—once published this credo within the paper: For Negroes Who Care to Know. But shortly after I subscribed in 1982, the paper actually modified it: For Jews and Negroes Who Care To Know.

I was so moved; I considered it the second greatest newspaper in America.

Likewise, I would personally rank its founder, Benjamin Thomas, in the pantheon of St. Louis greats, along with Chuck Berry, Miles Davis and Ike Turner. Maybe ahead of Ike Turner. He was nicknamed “the Baron” since being dubbed St. Louis’s best-dressed man in the 1930s. A time when East St. Louis hummed along the Mississippi River with factories and railroads. The Rust Belt steel and meatpacking industries began to abandon East St. Louis a decade after the war. Freeways cut through neighborhoods, reaping chaos, as the Cross Bronx Expressway had done in New York. The cessation of garbage pickup, environmental contamination and fires beset the city. In its wake came all the crime a tabloid paper could ever dream of. The 1980 film, Escape From New York, filmed Armageddon scenes in East St. Louis.

As a well-to-do, upstanding citizen with a strong moral code, Whirl editor Ben Thomas exposed an epic rise of depravity in the Black ghetto of East St. Louis, Illinois. Shootin’, stealin’ and rapin’ seemed more pronounced in this midwestern ghetto that dwindled from 82,000 to 27,000. Thomas saw this in Biblical proportions, to which he could only wax poetic in the purple prose of an obsessed newspaper hack. A hard-typing editor who began his very own newspaper in the annals of America’s freedom of the press.  Like Weegee, his work became its own art.

Starting as an entertainment editor, Ben Thomas wrote, edited and published The Evening Whirl by himself for 57 years. He retired in 1996 and died of Alzheimer’s a decade later at the age of 94. But as the Whirl’s history reflects, he may have had it for decades.

The paper always stood in good favor with police. During Ben Thomas’ reign, hundreds of St. Louis criminals were apprehended from mug shots in the Whirl, and murders were solved from tips. Yet criminals vainly kept Whirl scrapbooks of their own exploits. The paper flouted a total disregard of the white media’s editorial rules and etiquette. Littered with typos, malaprops and blotchy typeset, a feature might be continued on the back page, just to fit in its final word (the forbidden “widow” in typesetters’ jargon). Yet Thomas’ unhinged crime verse and poetic license were so brazen, each issue seemed like a cry against the madness. His sense of outrage became so jaded, he could only resort to absurdist poetry. Sexual obsession inflamed his religious reproach. He might nickname a pedophile “Tongue-em Young,” whose “tongue became a spike,” or recount a rootin’-tootin’ domestic maid fending off a rapist with non-stop farting. It’s a wonder it wasn’t until the 1970s when the local NAACP attempted to boycott the Whirl (needless to say, the paper was never nominated for a Black Image Award).

I once attempted to book a St. Louis trip to the Whirl with my associate, Richard Jaccoma. But Thomas refused to grant us an interview. No matter. It was with relish and abandon that we lost ourselves each week, getting to know the Whirl’s endless parade of bad guys, sexual maniacs, hero cops and church-going citizens. They were outed before the public in the following columns: Dope Eaters and Peddlers; the Hooch Hound Club (for dipsomaniacs); the Gun Club (those arrested for firing or carrying); the Sodomy Club (anyone so much as suspected of participating in the act); and the Wife and Sweetheart Beaters Assoc. The paper also gave extensive coverage to “the Stroll,” a wicked stretch of prostitution.

Thomas felt it his civic duty to embarrass the culprits of his crime-infested ghetto, across the river in Illinois, even devoting headline coverage to beer guzzlers busted for urinating on the sidewalk. Also among the East St. Louis demimonde were model citizen advertisers, like Dr. H.B. Woolcock, a spiritual healer (that’s Voodoo, of course) from the West Indies, who got rid of the “jinks” and cured women’s “lost nature.” After years, old Dr. Woolcock’s face in his ad suddenly changed to that of a young, turbaned Sabu-type. Another weekly ad was for Garo’s fish restaurant—where the honeycomb tripe was so soft, you could “leave your teeth at home.”

The doomed love affair of Kenneth “Dog Man” Edwards, a garbage man, occupied the next four issues. Thomas covered the police’s shock, the community’s outrage, Edwards’ parents’ woe, and ultimately, the true love between man and beast, as described in a jailhouse interview:

“Kenneth says he found more joy in making love to Nancy [the stray dog] than he did his  wife. . . . They would ride to the park. After kissing they would smell and lick. The car was their motel. He bought a special food for Nancy [for which he stole money] and mixed a little bourbon in. . . . He is protecting his beloved dog-friend and expects someday for Nancy to bear children. . .”

Ben Thomas wrote send-off poems and editorials to murderers, rapists and burglars—often unconvicted ones—on their way to prison. Dog Man Edwards’ was accompanied by a mug shot of Nancy:

If she ever quits me I’ll screw a frog

No woman in the world can take Nancy’s place

She has trained me how to keep the pace.

I kiss the darling’s tongue and lips

And kiss on down till I reach her hips;

It turns my tongue into a spike.

A year later, the Whirl topped the saga of Dog Man Edwards with that of “Horse Man” Pruitt, a stable jockey whose huge equipment scared women away. Pruitt was arrested for “raping and sodomizing four Shetland ponies,” one of whom dropped dead after he “wrecked their sex.” Typical was another headline, from 1987: PREACHER HAD SEX WITH HIS 3 DAUGHTERS, 14 GRANDDAUGHTERS, 8 GREATS AND 12 NEICES. Thomas admonished criminals in the middle of hard-news stories, often prescribing Biblical punishments—like lashing a rapist’s bare ass and pouring hot lead between his buttocks. He was deeply homophobic, outing pastors, doctors, even garbage men as queers and pedophiles. Ben Thomas resonated with Right-Wing Negritude. He editorialized in support of Supreme Court nominee Clarence Thomas during the Anita Hill confirmation hearings, arguing that man was entitled to beg for sex. Begging ain’t no crime. And woman will rue the day when a man begs her no more.

Now a modernized color paper, The Evening Whirl still remains the soul of East St. Louis, in its 82nd year. It is one of the few newspapers that continue to thrive in the digital era. The current editors only barely attempt to ape the poetic brilliance of its founder: “Baron” Ben Thomas, sui generis in American newspaper history. I have a over 200 hundred issues from the 1980s-’90s, which sit, along with 1,000 bound copies of Screw, with my “papers.” Whether my papers end up in a university library or a dumpster is almost irrelevant. They are a marvel to behold. 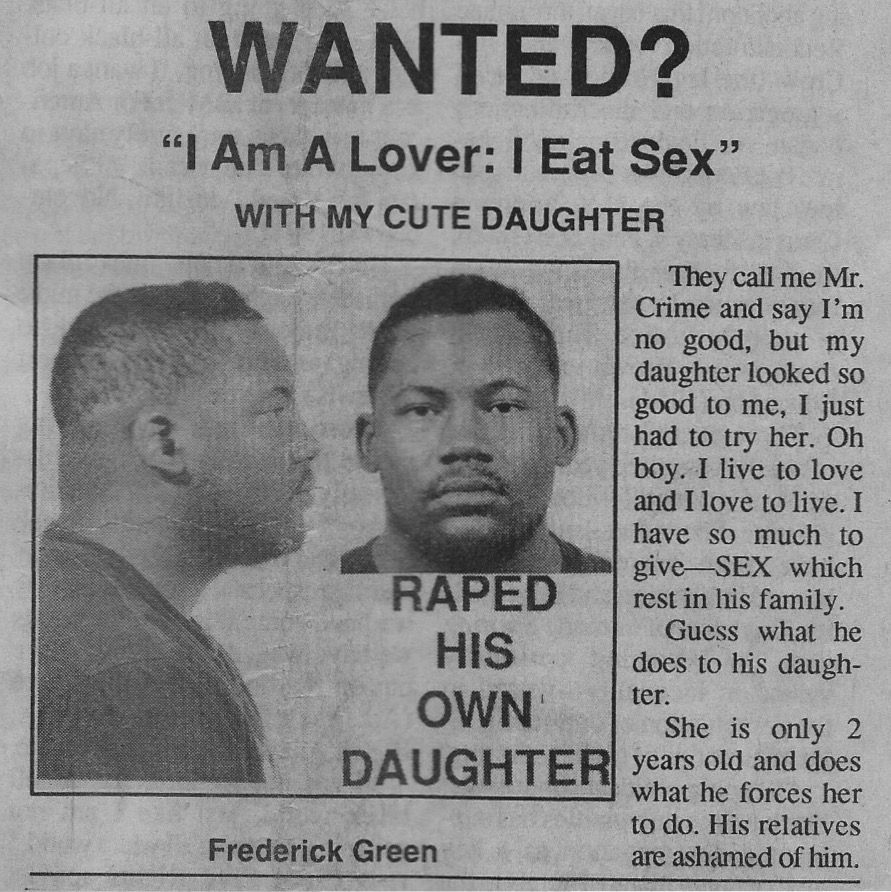 A relaxed standard of fact checking may have accounted for the following two cover reports in 1993. An apology appeared the next week. 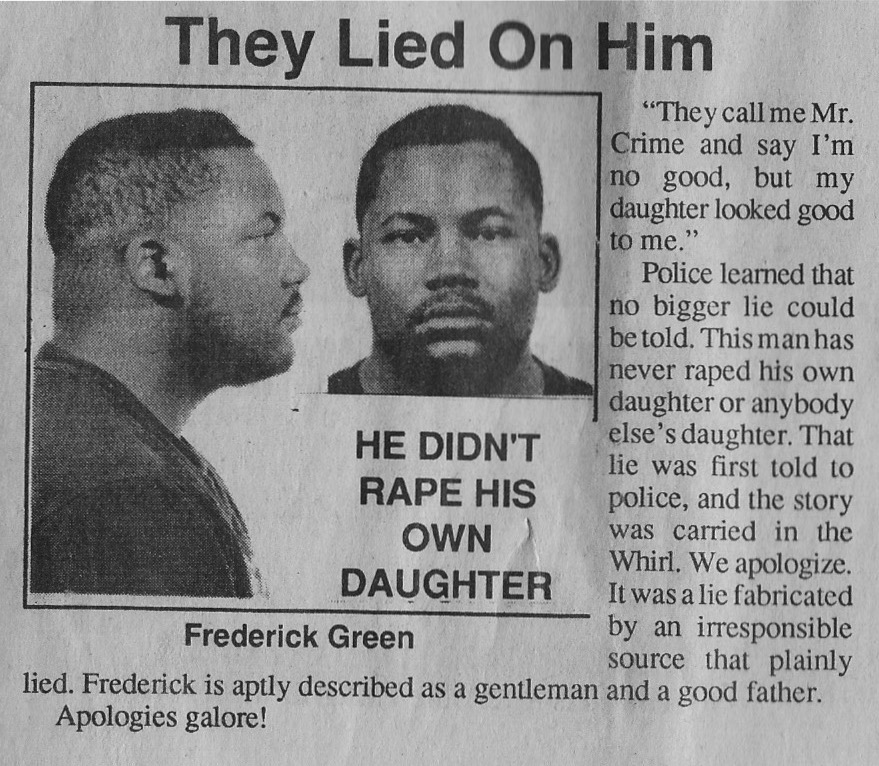 We can only hope poor Mr. Green didn’t hang himself before the apology came out.

The saga of Dogman Edwards 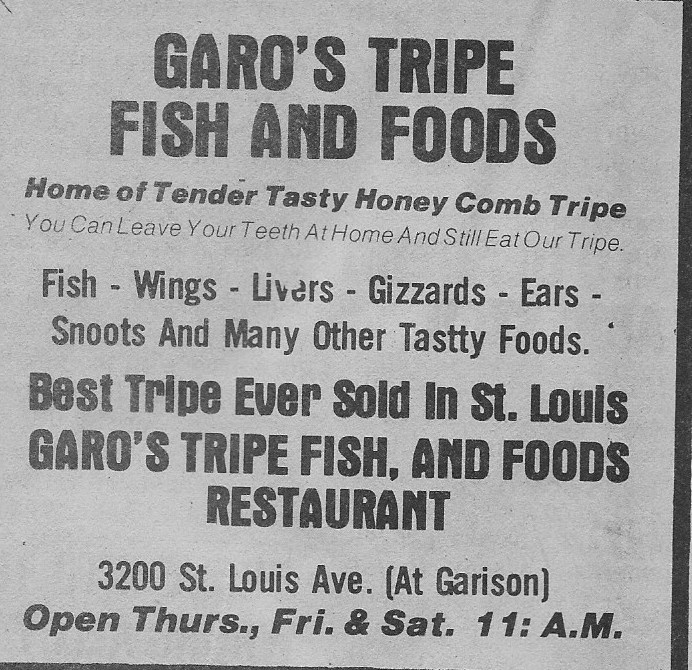 Toothless old-timers could gum some tripe at Garo’s

Who and Why were existential questions that appeared throughout each issue. 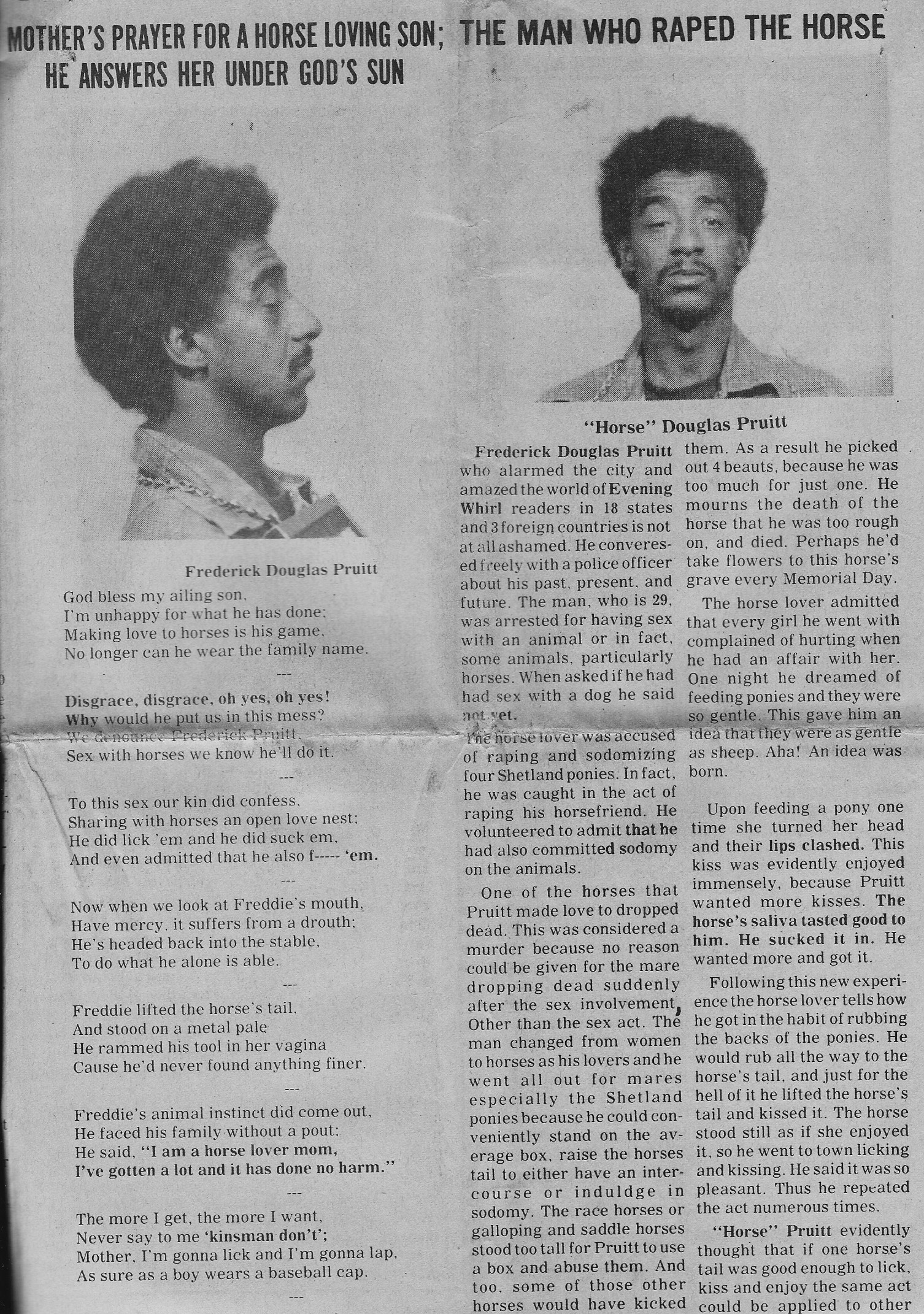 The saga of Horse Man Pruitt

← The Flatulence of StyleHell And Back →
Scroll To Top